It was a girlie night out and we knew we wanted to go someplace where we could chill and chat. Mexican seemed to be the

order of the day so we settled on Maria Bonita although it should technically be called Maria Bonita Taco Shop and Mexican Grill – a tex-mex restaurant in the heart of Jumeirah that I have now visited a couple of times.

My first visit with the boys did not leave much to be desired but with a few friends talking positively about their experience I wondered if it was only me feeling that the food and service was below average. So to be fair, I did give it another shot when the opportunity arose with my girlfriends.

This restaurant has an outdoor and indoor seating. With summer upon us, they have put up plastic sheets to keep the 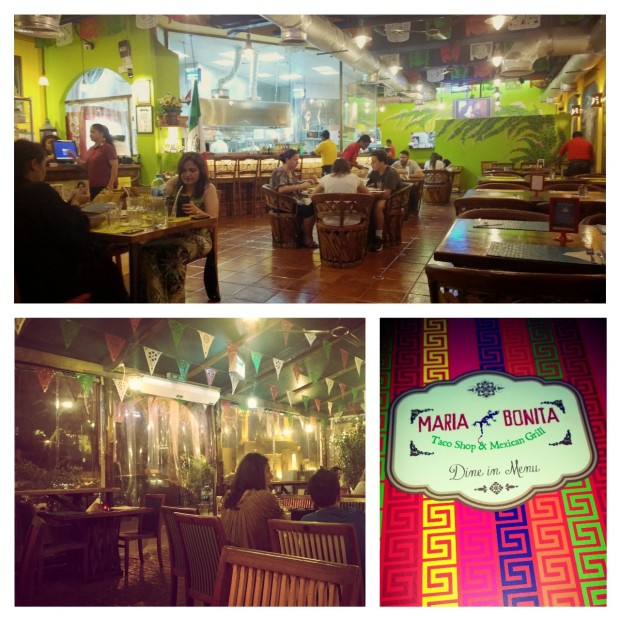 outside cool. We chose to sit outdoors. The chairs with their thin cushions are not the most comfortable for a long planned dinner session. A vibrant parrot green covers the walls of the inside of the restaurant. Décor wise nothing exciting to write about unfortunately.

So lets get to the food part. They offer nachos and salsa sauce as a starter of sorts. Go easy on the nachos – they can fill you up pretty fast.

I wanted to try the Mexican drink Jarritos which comes in various flavours. Since I am very partial to Cola I thought I would try that option. Thought it best to seek an expert opion on the taste befor e tried it so inquired with the waiter as to whether the Mexican Jarriots Cola flavour was close to its global counterpart Coke and he said “It was not nice”. So that sort of threw that flavour off the list. So what other flavour would be safe I thought so went with the orange or Mandarin flavour. The taste was a watered down Fanta – not as ‘orangey’ nor as fizzy.  Would I try it again? I think I will stick to their bottomless soft drink refill option the next time, or maybe just water!

We ordered 3 mains. To each his own we said …

Of all the 3 mains, only the Chicken Jumbo Quesadilla passed the taste test. My friend enjoyed it and the only reason she could not finish it was because it’s a dish that should be shared. My friend who ordered the Diablo Chicken Wings was extremely disappointed. She asked for more hot sauce which still did not give the wings the kick it needed – so a lot of it went back to the kitchen. Luckily the Quesadilla portion helped her dig in. My Chicken Enchilada Rojas was a bit bland, I wanted more of a zing to it. I did finish it though considering how hungry I was.

After we finished dinner, our plates were not cleared and I thought perhaps because as with all girlie nights, chatter does not stop, the waiters were being polite and not disturb us. But 20 mins later, you would expect in what was by then an empty restaurant (more waiters than us diners), the waiters to notice (not sure if they were even cared) that none of us has touched our plates.

For dessert I had decided on the Pastel de Chocolate (AED 28) (Delicious chocolate cake made with three different kinds of chocolate) even before I ordered my main course. And what a disappointment it was. Felt like it had a powdery taste and somehow I felt vanilla ice cream might have helped – helped but not salvaged the dish.

But here I have to mention another dessert which was tried when I went with the boys – the Pastel Tres Leches (Cake ‘’Three Milks”) (AED 30) (Traditional grandma’s recipe of extra moist cake).  This desert wowed both the boys. So if I have to recommend a dessert here it would be this one.

Maria Bonita is a place you will either love or hate. I fall into the latter category. I feel this restaurant is over hyped – perhaps because it has been around for a while and perhaps there were not that many options of tex-mex (you cannot call this a Mexican restaurant – although their website claims to be 100% Mexican) when it first opened its doors.  With more options opening up, Maria Bonita will survive with its loyal clientele. But if it wants to thrive, it might need to seriously relook at taste, service and décor.

Location: Umm Al Sheif Road, Umm Suqeim. [From the signal at Spinneys on Al Wasl Road (Abu Dhabi to Dubai direction), take a left at the traffic light. Go straight all the way to the end (Beach Road) and take a U-turn. Enter the first service lane and park anywhere you find a spot]  Telephone: +971 4 395 5576. www.mariabonitadubai.com