GRUB SHACK: GIVE GEMMA’S A SHOT

A couple of friends had introduced me to Grub Shack a while ago, but we unfortunately only got to try the starters (3 to be more precise) and it just felt incomplete without mains. I knew I had to go back, but this time armed with foodie friends who live to eat 😊 Months passed before that day eventually came to pass, last weekend.

We landed up at Grub Shack at 1.30pm and walked in to a restaurant filled to capacity. We were told we would have to wait for 45 minutes – now that is a long wait but we girls had enough catching up to do (if my husband was with me, I can guarantee we would have left), and we honestly thought 45 mins would go by quickly. No one took our name, even though I went to the counter to give it – all the servers seemed to believe that they could somehow remember the order in which people had arrived. So out we went and sat at the barrel tables outside – waiting, talking, people watching (especially those trying to reverse their cars out of the slightly tricky parking) and back to checking on how long it would take for us to get our table. I do believe that a group of people who came after us, but chose to order their starters and drinks outside while waiting for a table inside – were shown a table before us – I don’t know if they had a reservation, because when we asked about it – we were give mixed responses – first an apology and then 3 mins later, someone came and told us they had a reservation!

In hindsight, we began our lunch making a HUGE mistake – we made no reservations for a Friday lunch!!!!

Anyway, we were just glad that the waiting was over, and we got to sit in an AC-ed environment.  Once seated (close to the kitchen so we could overhear all the chaos that was to continue through our meal) we quickly ordered our drinks – Watermelon with Basil, Mango & Chilli and a Virgin Pinacolada. All three, thoroughly enjoyed by us – and did help cool us down! 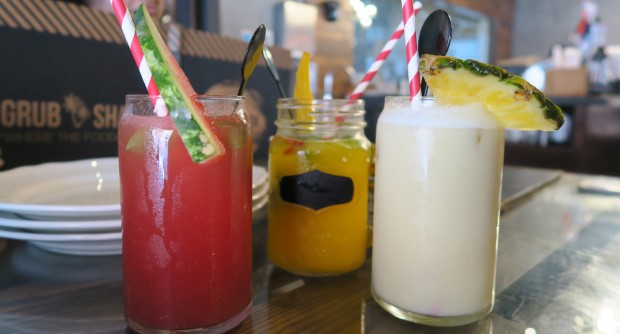 The last time I had visited, we had tried only the starters. I had absolutely loved the Calamari Twist – and without batting an eyelid, I ordered it. We also ordered the Fiery Piri Piri FishTikka. I was disappointed with both. The flavours I remembered of the calamari from my previous visit were lacking – completely. It came out oily, with none of the masala taste I remembered from my previous visit – so I sent it back – it came back not much better.

The fish came overdone!!!  My only assumption in all this (looking at the harrowed faces of the servers, with a few raised tones amongst them – I was sat near the kitchen remember) was that maybe the kitchen was finding it difficult to keep pace with the number of orders!!!!!

But let me balance this experience out. The previous time I visited I had the Cheese Chutney Bomb – and that was superb. The Bangalore Chicken was ok – and the reason I say ‘ok’ is because the ‘bomb’ and the calamari were far, far superior in taste.

Our mains we had decided would be from the Goan specials – after all that was the reason we had all waited for 45 minutes. We were hoping our choices would blank the ‘unhappiness’ we felt after our starters.

We ordered Gemma’s Mango Prawn Curry and the Fried Kingfish in Rechado masala. Since my friends had never tried Sanas (fluffy steamed rice cakes – Goan version of idli) we decided to order a plate (3 sanas to a plate) and plain rice. Of course, a side of fried papad was my cherry on the top 😊

There is not one thing I could fault with the prawn curry or the kingfish – both were simply flavourful, perfectly cooked and had a ‘just-like-home’ taste. We devoured both these dished. I admit, that I ate with my hands – just like I would at my aunt’s house in Goa – the food really did feel that homey. 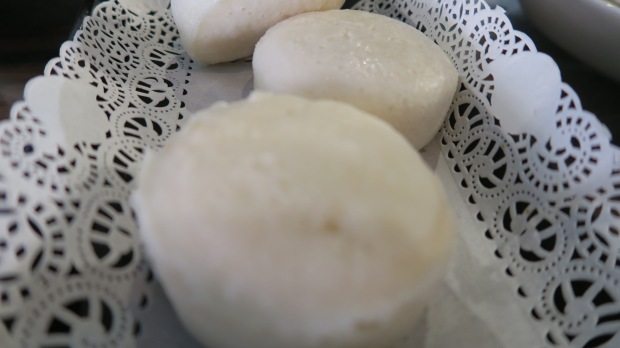 My take home from this is – focus on the dishes that start with ‘Gemma’s’ (she is the owner’s wife) – these will be dishes which will be made based on a recipe that has been passed down from generation to generation.

We did not stick around for dessert and as we left there were still people who had been waiting patiently for a table (people actually wait at 3.45pm to be seated for lunch!).

Service could do with improving (especially when it is this busy – and I was told that this is the case every weekend). The servers were in a hurry – to take your order, to answer, had no patience to talk you though the dishes when you ask them for advice, they brought the mains before clearing the empty starter serving dishes – so it got a bit chaotic. One of the stand out moments of bad service came when I wanted to order a bottle of water and mid-sentence into my order, the server gets called into the kitchen and just leaves – without so much as an ‘excuse me’!!!

Will I go back – for sure! My two experiences were in vast contrast with each other and to base my decision to return only on my last one would be silly. The last time I went (maybe because it was at 7PM) there were not that many people and the manager Lancy had time to chat with you, the food came out at a more leisurely pace – I did not feel like they wanted me to leave and seemed to be more ‘Goan-paced’.

So next time, this is what I will do – I will book a table, stick to Gemma’s mains in the Goan section and enjoy a nice chilled mocktail.

One thought on “GRUB SHACK: GIVE GEMMA’S A SHOT”