Of late, a new addition to the dining scene in Dubai are Supper Clubs – a lovely intimate gathering, dotted with good food and energetic conversation that is hosted at someone’s home. The food served is from a set menu and is prepared at home by the host – a way to either introduce guests to a new cuisine, a specialized expertly crafted dish (like Ramen in the case of @astoryoffood) – whatever be on the menu, these supper clubs offer a wonderful social meet up with people who you most likely would not come across in your regular daily life, interesting conversation, cultural exchanges and a small interactive community of people who love food.

I for one had never been to a supper club and it was something I wanted to change. Thanks to a blog I follow – She said, She said (@shesaidshesaid_dxb) I heard about a supper club called The Table Project – an initiative started by two lovely ladies – Nida and Haya – three months ago, with each specializing in the cuisine of their ancestors.

As usual, I was late to the table (pun intended). I missed the announcement date of the Memoni table that is hosted by Nida on Instagram and of course these places are limited and fill up quickly. But I lucked out – there were two cancellations and I jumped to get one of those seats. And even though it was a bit (understatement considering the prep time taken to make the dishes) last minute, I shared with Nida that I don’t generally eat beef – two of the dishes on the menu had beef as the main meat – and without a moment’s hesitation Nida had offered me a solution and very kindly accommodated my request.

Honestly, I did not know much about Memoni food before I arrived but reaslied that I had more in common with the Memons than I realised. And so the story goes: During the partition of India, in 1947, a large number of Memons who come from the state of Gujarat (my connection – I am a Gujarati too) decided to migrate with quite a moving to the newly established state of Pakistan, a considerable number also travelled to Myanmar, namely to the city of Yangon. And as with the ways of this world, when people migrate, they bring along their culture and food, which is an integral part of a community’s identity. A prime example of this is the way that the Memons adapted to eating and changed Khao Suey (traditionally Burmese dish) according to their likings, tells their story.

And I also realized that Memon food cannot be found outside homes, away from family tables. 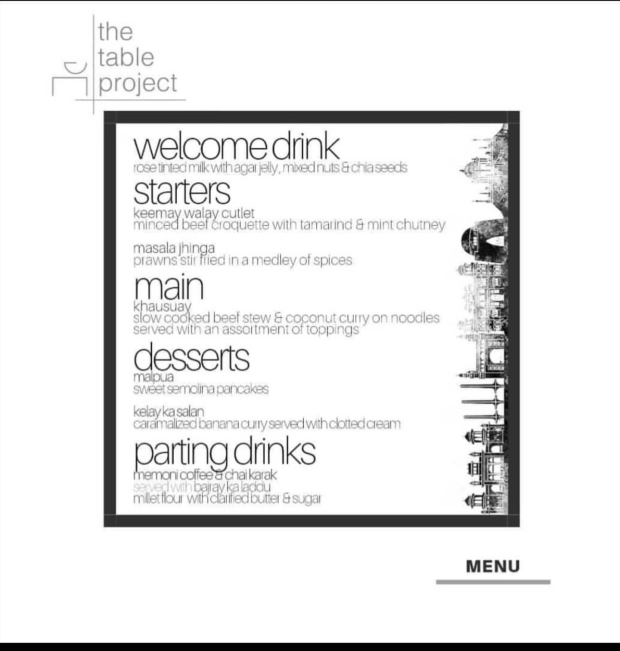 Let me quickly talk about each one, but I won’t go into too much detail as this is a meal you need to experience in its entirety and decide for yourself.

Thirst quencher was a welcome drink which is traditionally served during engagement ceremonies – RoohAfza, cold milk with agar jelly (made from some type of seaweed), mixed nuts and basil seeds. 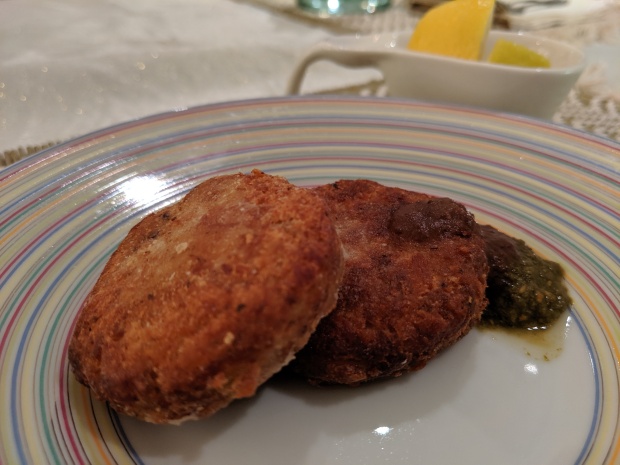 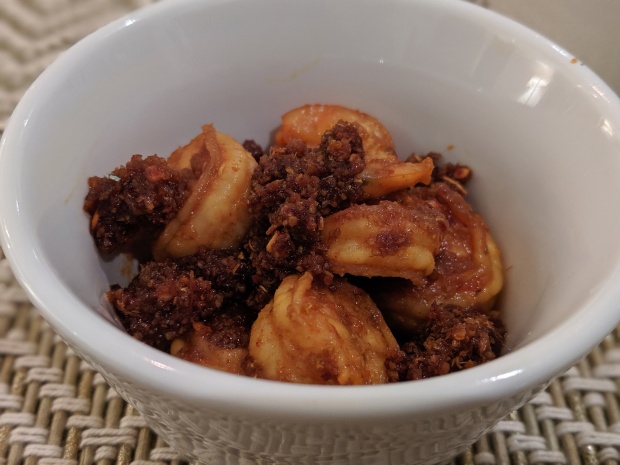 Palate cleanser – don’t know what it was as I was busy focused on getting the spoon to balance and just as I clicked the shot, the spoon fell – you can imagine the red stain that it left on the table cloth!! OOOPPPSSSSS…

Khausuay (pronounced ‘Khausa’) – (customized for me – it was originally beef). This felt familiar to the Burmese version but was still different. Turns out that this dish travelled across Burma to Pakistan with a few variations made along the way – combining South Asian ingredients with elements from the original East Asian version. In the Memon version spaghetti is the dish’s base (while in the Burmese version it is noodles) topped with curry made up of coconut cream and gram flour and curried mutton stew. The condiments that accompany the dish included – green chilli, garlic, peanuts, chopped coriander, home made chaat masala, ginger, mint, crispy potato sticks (or as Parsis’ would call them salli), fried onion and fried noodles and unforgettable lemon. 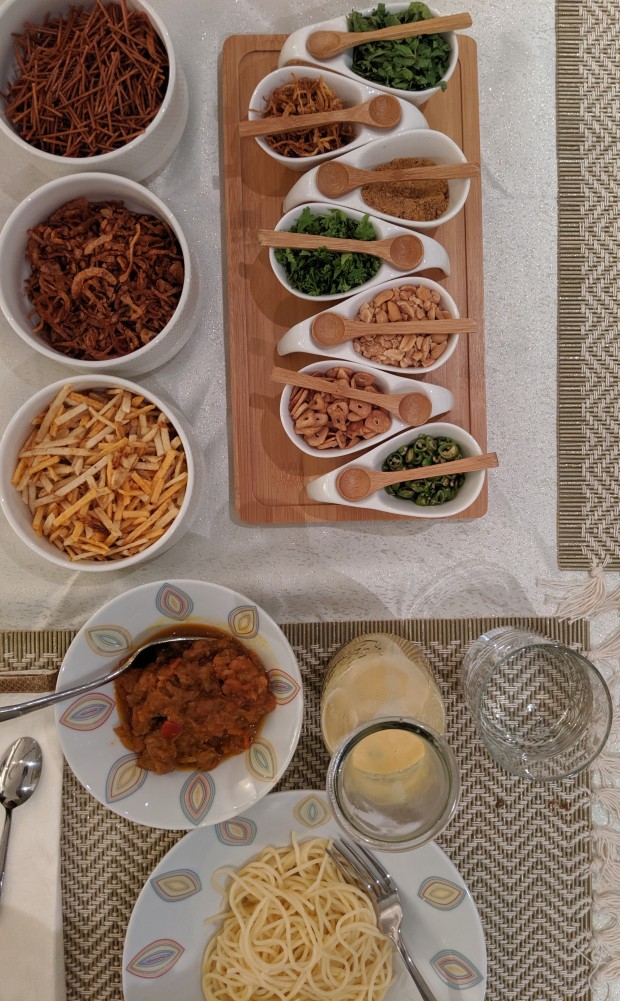 Kelay ka Salan – this may not make for a pretty picture, but it’s one ingredient cooked over time – its caramelized banana served with clotted cream

Memoni Coffee – RICE! Seriously in the coffee – never thought that would ever happen! Well it did and it was not bad. The Memoni coffee is basically coffee and rice boiled slowly. I cannot explain it – guess you will need to try it for yourselves (sorry no picture) 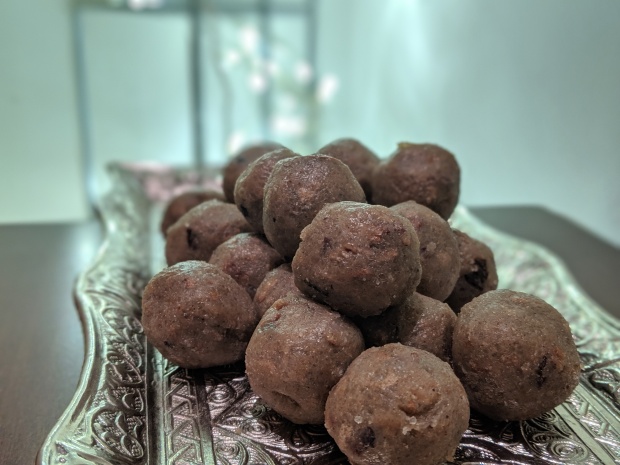 Would I go to another supper club – most definitely. I am waiting for the dates of Haya’s Palestinian supper club to go up so I can see if I can make it. What I loved about the supper club experience was the sheer fact that you are stilling amongst strangers who over course of the meal turn into foodie friends, who have let you glimpse a little into who they are and where they are from, who have shared stories which made you laugh and relate to.

For me, it was a privilege having a seat at Nida’s table.

NOTE: I ate at The Table Project’s Supper Club on my OWN time and money! The views and opinions expressed on this blog are truly my OWN.

← ASIAN5: MUST REPEAT
MOHALLA: THE NEW INDIAN IN THE NEIGHBOURHOOD →