Ever since Jiggs Kalra’s Masala Library opened at JW Marriott Marquis Dubai, it’s a restaurant I had always wanted to visit. I have never been to any Masala Library’s Indian outposts, so I had nothing to go on except for Jiggs Kalra’s reputation, hype and hearsay. So when a foodie friend and I were going to meet for a long waited catch up – the choice was made simple by the fact that both of us wanted to go to the same place.

Masala Library has occupied the space left vacant by Atul Kocchar’s Rang Mahal – but unfortunately, they haven’t refurbished it – so you still have the massive pillar like things in the middle and it’s still quite a dark interior. 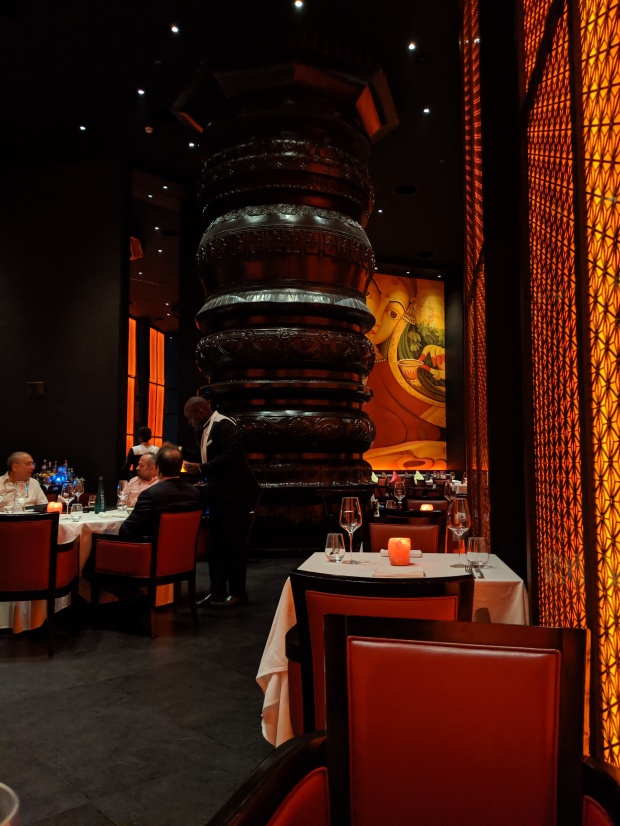 In terms of what we had – we made the decision simple by settling for the 12-course Tasting Menu (priced at AED 245 for the non-vegetarian version).

We kicked off with an amuse bouche of coconut water and a smattering of mango pulp.

As part of the SNACK section of the menu we got to try:

Deconstruction of Samosa – Three tiny dots arranged symmetrically on a puff pastry strip atop a banana leaf on a straw mat was what was simply a deconstructed version of the Punjabi Samosa. It was a small bite packed with nostalgia and a carnival of flavours. 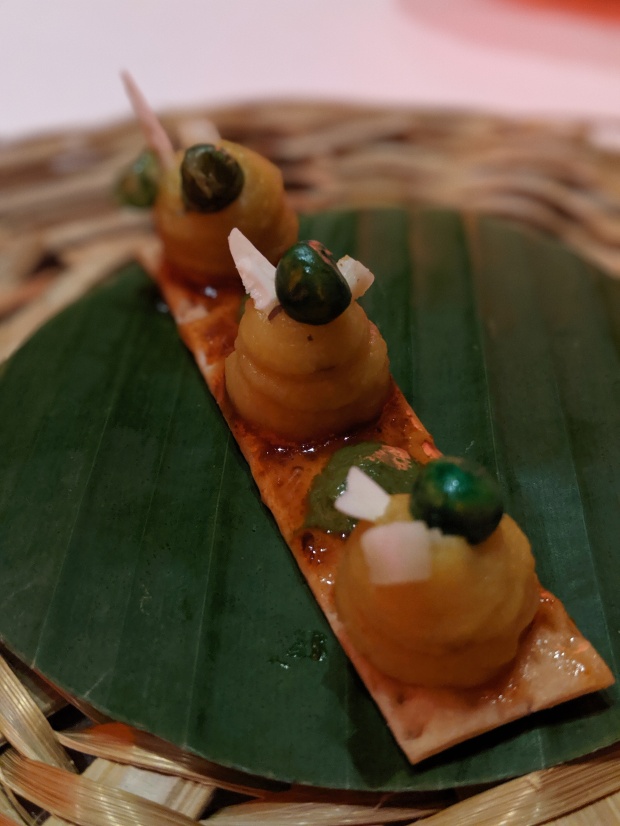 Dahi Bada – This was a lightly whipped yogurt served with a soft and savory sponge that elevates its street-food status.

Jhaal Moori Cookie, Ghoogni Chaat – The jhaal moori cookie was the cousin of the better known bhel puri – spicy puffed rice made into a crispy cookie; while the ghoogni chaat was a milder eastern Indian version of chhole (curried chickpeas).

Farmer’s Staple – A a half piece of bajra roti (bread made from pearl millet) stuffed with caramelized onion and served with a tiny dollop of white butter. Delicious

As part of the SOUP section of the menu we got to try:

Mushroom Chai – This was ‘made’ while we watched – a tea-ceremony with dehydrated mushrooms and some white truffle powder poured over by black mushroom consommé and presented as ‘chai’ – it was delicious – and although I may have been tempted to aask for more, I refrained – I knew there was a lot more coming.

As part of the APPETIZERS section of the menu we got to try:

Caviar Malai Prawn, with Pink Peppercorn – This was a single prawn with pink peppercorns that tried to reinvent the Bengali malai curry

Chicken Tikka – Not just one style, but chicken tikka prepared three ways – it was both familiar and enjoyable.

As part of the MAINS section of the menu we got to try:

Rajasthani mutton curry – I enjoyed the thick gravy and shell kachori and there was a slight spice after taste, that wanted you to dig into the next bite.

As part of the DESSERT section of the menu we got to try:

Jalebi caviar – Pearls (caviar!) of traditional jalebi dessert alongside a light saffron foam with pistachio rabri (reduced milk with pistachio) – once mixed, the jalebi taste stood out but the subtleties of the pistachio and saffron were lost on me… and the clam shell it was served in – not the most convenient to navigate a spoonful out of.

Makhan Malai – This milked based dessert was scooped up quickly and masterfully by me – it was aerated saffron flavoured butter cream with shakkarpara (a sugar-glazed filo crisp).

Ashen Kulfi – Caused a bit of some oops moments as I tried to navigate my spoon to cut through the frozen kulfi. But once mission was accomplished the  banana ash-coated kulfi ice cream with candied nuts was an interesting combination.

Finally, it was time for a physics class as we are about to leave. Quantum levitation was used to serve us a Belgian Chocolate Truffle – the illusion of the floating chocolates once again failed me and I think this might have been because it was performed in front of me – so it lost its ‘wow’ factor  pretty quickly (I think it looks better in photos than in reality). More disappointing was the taste of the chocolate itself – they might want to take a few tips from Sprungli!

Overall, service was great. The food was good. Definitely worth trying it – at least once!

NOTE: I ate at Masala Library by Jiggs Kalra on my OWN time and money! The views and opinions expressed on this blog are truly my OWN.